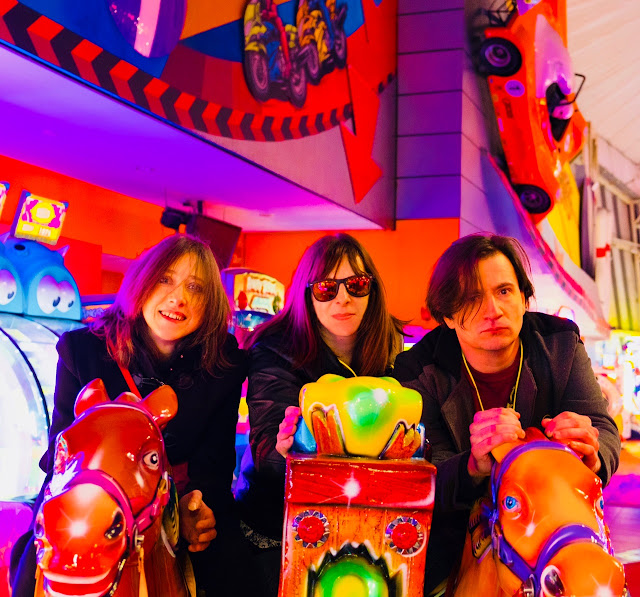 
Yesterday's update featuring a hard hitting punk banger about police brutality went down well so I'll capitalise on that, with something completely different....

Welsh day-glo bubblegum disco punks Helen Love have been favourites of mine ever since the early 90's when in those pre internet days they'd pop up occasionally on the John Peel show. It's always a joy to learn they've released a new single (and boy have they released some great singles; Joey Ramoney, Punk Boy,  Does Your Heart Go Boom, Long Live The UK Music Scene, Shifty Disco Girl, You Can't Beat A Boy Who Loves The Ramones etc etc etc. I reckon a greatest hits by them made up of a dozen or so tracks would be as good as anyones). It's been a couple of years since I featured them on here (with their tribute to the former X Ray Spex frontwoman Polystyrene  https://justsomepunksongs.blogspot.com/2016/05/helen-love-thank-you-polystyrene.html) but I'm happy to report they're back and they're still as much fun as ever.

Mirroring our current hot spell, the summer of 76 saw "the UK baking, people melting and weirdos bathing together to save water. The grass turned brown and The Ramones played their legendary Roundhouse show in London. The kids in the suburbs wore double denim and raced Raleigh Choppers." The new single salutes those fashion icons, it's available via Alcopop! Records on a very limited square 7" (the clear vinyl sold out in under an hour and the black vinyl doubtlessly won't last long). You can also find it digitally here :  https://alcopop.bandcamp.com/album/double-denim

Summers here, so are Helen Love. This is Double Denim....