An interview with James Young, vocalist with The Scabs 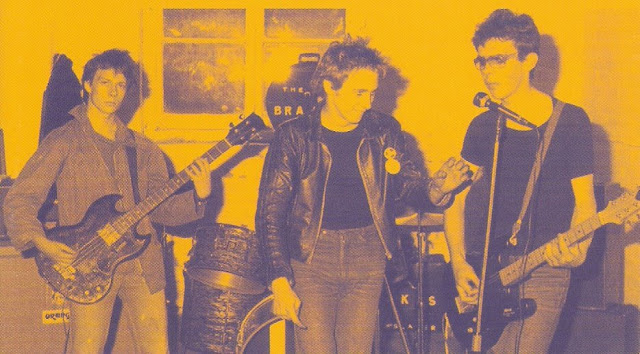 The Scabs have already featured in this blog, a while back I posted a song called Amory Building which came off their solitary release, an ep from 1979. Since then I came into contact with their vocalist/composer, James Young, who revealed he doesn't even own a copy of the single anymore. I took the opportunity to ask if he'd like to do an interview and I'm grateful to him for saying yes so here it is.....


From what I remember of The Scabs, you were 5 students at Exeter University who's only release was an ep in 1979. Which bands influenced you? Was it a typical case of 5 teenagers hear The Pistols and The Clash and decide "we can do that....."

Yes more or less correct....we were 4, never 5, and yes we felt that we could do it too. The band was the idea of John Salmon the lead guitarist....I didn't think he was particularly "punk" but he announced that he wanted to start a band called the Scabs (as in Strike Breakers Scabs)....Steve the bassist was also a "founder member"...he and John were already mates, and they found Patrick Cunningham, the drummer, who in the true spirit of punk rock couldn't really play the drums when we started but he looked kind of punk and at the time that was more important. They had an audition for a lead singer and I believe only 2 people turned up so it wasn't exactly a triumph that I was chosen. John Steve and Patrick worked pretty hard at rehearsing....and we had our first gig only a couple of months after we started...in a university bar called Cornwall House. It wasn't hard to get gigs on Campus....in those days there really weren't many people who could set up and entertain and the news that ANYBODY was playing anywhere was quite a big stir. But we weren't really very good at first....there were a couple of non-student punk bands in Exeter who were definitely better than us and we were painfully aware of that and often felt like we were a bit if a joke early on


I'm guessing that back in the late '70's every city and town had regular punk gigs? Was it easy to get bookings in the early days? Did you manage to attract decent crowds and did you share a stage with any big name bands?

No name bands no....punk rock looks different through the rose tinted glasses of hindsight. Back in the day the number of people who considered punk worth listening to were a REAL minority....most people liked Supertramp, 10cc, and still those old pomp rock bands like YES. A lot of people were moved to getting angry at even hearing a punk record or seeing somebody not wearing flared jeans. I dyed my hair at the time and on several occasions had to run extremely fast to get away from gangs wanting to beat me up, other times standing on a station platform EVERYBODY would be staring as if I wasn't wearing any clothes....so the general consensus was disapproval, and I think a lot of punk bands would echo that as the general "zeitgeist" once they moved out of the centre of London or Manchester. Name punk bands weren't a particularly big draw in themselves with the sole exception of the Sex Pistols and the Ramones. There were NEVER any punk bands booked at Exeter University....when the Stranglers were booked in 1980, when they were really a spent force as far as punk energy was concerned, the Security Guards announced that they would refuse to work if they played, and the gig was immediately shifted to Plymouth. If you study the charts at the time you can tell that bands like, say,The Clash, simply weren't selling any singles. The Sex Pistols were so cleverly managed with all that "getting banned by the BBC" stuff their sales came from notoriety more than any love of the music.


Talk me through how the single came about, was it a thrill knowing you were going to release one? Did it receive much airplay/press acclaim? Did it sell out quickly?

There were some independent records around, and that's what ours was. It was Patrick's (the drummer's) doing. He actually financed it and did the whole thing. I simply wouldn't have had the money. We all went up to London and there was a cheap recording studios somewhere right out in North London. A really nice guy called Marcus who was a bit of a Hunt Saboteur and general Anarchist guested on saxophone, and the whole recording was done in 2 hours...I think I just had 2 takes. Patrick then got 1000 pressed and set himself up in the Student Coffee Bar selling the singles. And we sold well and got more pressings. Because there just weren't any singles around by punk bands in any number, we were reviewed by all the music papers. In those days the music papers ruled....you just went and bought what the music papers liked...there was no way of previewing what they'd sound like, you just had to go and buy. "Sounds" gave us an amazing review, Melody Maker good I think and the others said we were "amateurish" I expect. But the reviews helped Patrick to organize a tour. We played 6 or 7 dates in a week in some pretty weird places from Bradford to Cornwall but always to "a crowd" and it was never a disaster. But I don't think the single got any airplay at all..... there just wasn't that kind of opportunity.... only Radio One and I'm not even sure if John Peel had got his show going in those days and that was only 2 hours a day. But you would never get played on Radio One during the day....it was all Agadoo.


I read somewhere that your brother spent his lunchtimes selling the ep to schoolkids. Did you ever feel famous in any way? Did you think you'd still be discussing it 35 years later?

That must have been Patrick selling the EPs....he wasn't my brother but he worked really hard at promoting that record. No I never felt famous in any way....embarrassed most of the time....we played an open air gig at Powderham Castle (I think that's what it was called) and much to my surprise a really large crowd were really appreciative...that was the only time I really felt like we'd done something worth celebrating. 35 years later the record does sound good and wow no I would have been astonished to think that anybody would be interested. That was the age of "burn bright for a few weeks only"... once a record left the charts you'd NEVER hear it again. Heart Radio would have astonished people in the 1970's.... well maybe not astonished....but that was the modus operandi of Radio 2!!


Was another release ever in the pipeline?

Yes we recorded another 2 tracks about a year or two later....it wasn't bad at all and John was hoping to get a record deal. Apparently we almost did but punk was losing ground to the Mod and Ska bands already.....if we'd have recorded something about Popping Blues on my Lambretta we'd have got a deal no problem.

Why did you split up and with so many of the old bands reforming to gig at festivals like Holidays In The Sun/Rebellion etc have you ever been tempted to give it a go?

I think we split up because we left university... I think the Scabs did reform but they didn't ask me to join them....I would quite happily give it a go of course....

Finally, do you still listen to punk music or have your tastes changed over the years?

yes punk rock rules!! I really like the Parquet Courts at the moment....their new album is quite amazing. I still dabble with punk songs occasionally in my attic with Cubase and recently wrote and recorded a song called BMW and it's still amateurish!


I'd like to say a big thank you to James for taking the time to answer my questions. Song of the day is another one from their classic ep, this is Leave Me Alone......