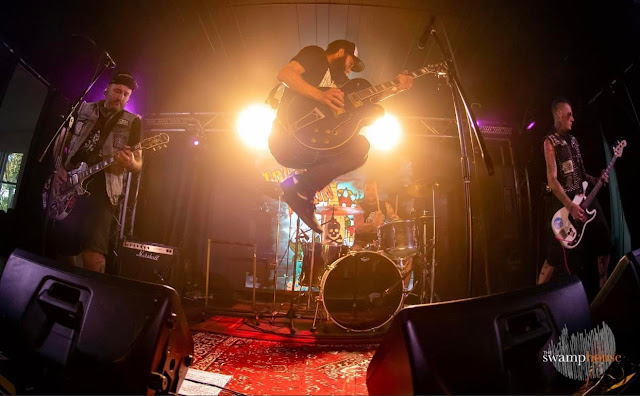 (Pic : Swamp House- Photography)
It's Monday, the day after the night before. So what was the most popular song on this week's Just Some Punk Songs show? Read on...
Trashed Again (https://www.facebook.com/trashedagain) are a quartet from Newcastle (the one in Australia not the north east of England). They feature a line up of Robbo (vocals/guitar), Drew (drums/backing vox), Micky (guitar/backing vox) & Cal (bass/backing vox). They're influenced by the 70's punk scene plus bands such as Rancid, US Bombs and Bouncing Souls.
They're a new band to me despite being around since (I think) 2018 and whilst not being the most prolific of outfits 2022 has already seen them release a couple of eps. The most recent is boasts 7 tracks and is called Broken Bones. If you're a fan of the bands listed amongst their influences then it'll be right up your street. Shouty, anthemic punk tunes with an abundance of energy and some cool Matt Freeman inspired bass licks. You can get it here :  https://trashedagain.bandcamp.com/album/broken-bones
This is the opening track, it's called Psycho...
Posted by mickfletcher at 00:15