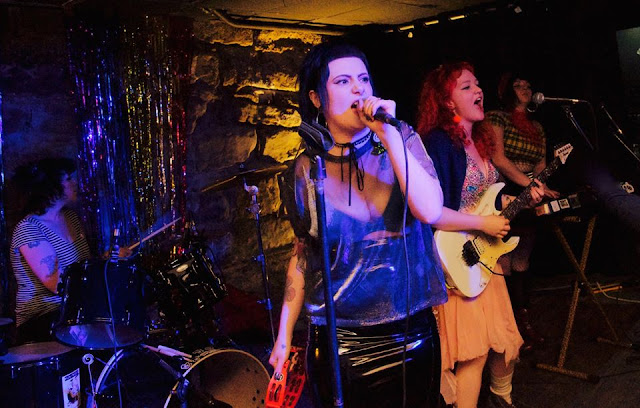 Tomorrow sees the first Just Some Punk Songs show of 2019 (tune in and have a listen : https://www.facebook.com/events/361523054674063/) and as always I've been searching for new punk releases to share with a growing audience. One of those songs on this week's show will be this cover of the Adicts' classic My Baby Got Run Over By A Steamroller. It was on the 1982 album Sound Of Music and remains one of the highlights of their back catalogue. Now it's been remade and retitled and remains really rather good.

Klackers are a 5 piece from Moncton, New Brunswick who line up with Shannon Goguen (vocals), Sammy Klacker (guitar), Dylan Hackett (bass), Julie Daigle (keys) and Emily Wiliston (drums). Last week they released their debut, Self Titled, album and it's a great introduction to a very promising new band :   https://klackers.bandcamp.com/album/klackers

They've been together for around a year, tag themselves diy candy pop/garage punk and play off kilter, edgy pop songs with distinctive female vocals and nagging keyboards. Reinforcing their riot grrrl credentials is a cover of Bratmobile's Gimme Brains (the 2nd cover on the album, the remainder all being original compositions). As well as the digital version of the album you can pick it up on cassette from the band : https://www.facebook.com/klackersband/

So the Adict's cover, this is Sleepover....