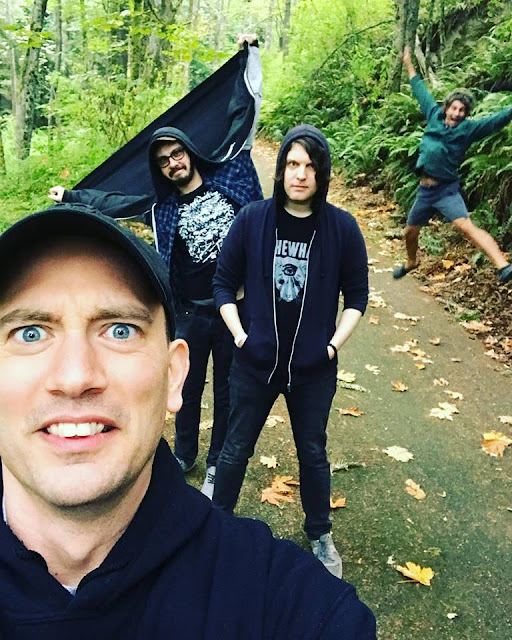 Portland, Oregon 4 piece Abolitionist return to Just Some Punk Songs today with a track from their brand new 8 track mini album A New Militance. It'll soon be available on vinyl and cassette (250 copies on opaque pink 10" vinyl & 50 white/pink cassettes available mid February) but for now you can download it "name your price" on Bandcamp : https://abolitionist.bandcamp.com/album/a-new-militance-mlp-2019

Originally intended to be released as part of a double album alongside last May's The Instant lp it was written last February, inspired by the 2016 presidential election. As you'll notice, all the songs are one word titles and they coalesce to form a politically themed concept album ending with hope that "It's over. The bad guys lost. They never stood a fucking chance once we all fought as one." but warning against complacency "When the war is over, the real work begins..."

The line up of the band is Dustin Herron (vocals/guitar), Jeremy Dunlap (guitar/back-up vocals), Joey Mohler (bass/back-up vocals) and Sean Rule (drums). Dustin tells me they won't be doing much promo on this release (so feel free to share it around for them as it deserves to be heard) as they'll be concentrating their efforts on a new 12 song album that's scheduled for release in May or June (digital/cassette first, hopefully vinyl eventually). There's also plans for a summer tour so keep an eye on Facebook for details :  https://www.facebook.com/abolitionist.portland.9

From the mini album, this is Avalanche...

The pink bombs were a start to an unforgiving war. Soon there was an avalanche from an unforgiving source. No peaceful marches, online petitions. Too fucking sick of the bloody war on women. You should have seen it. It was a bloodbath, reminiscent of the French Revolution. Autocrats, with their pockets lined with cash. Wife-beaters, with their flaccid micro-dicks.