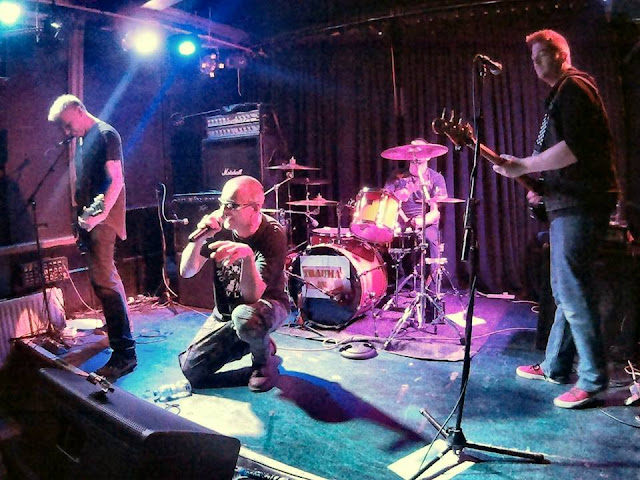 Who Killed Nancy Johnson? are an energetic "kind of punk, kind of post-punk" 4 piece from Reading and Wallingford who were called Nancy Johnson in a previous incarnation and who's line up features Stefan Ball (vocals), Pete Moulton (guitar/vocals), Julien Bruinaud (bass) and Mark Wren (drums/vocals). Influenced by the likes of The Stooges, Ruts, Wire, Magazine, Black Flag etc they formed in 2015 and have been building up a reputation as an exciting and incendiary live act (comments include "jaw-droppingly good...more hooks than a deep sea fishing line").

They released their debut ep, Cops And Robbers a year ago and you can find it here : https://wknancyj.bandcamp.com/releases

Tomorrow they'll be releasing a new single titled Dark Horse, it'll be available on all major streaming and download platforms and it's a teaser for their Flat Earth Theory ep which follows in a few weeks. There's a number of gigs lined up in support of the ep and details can be found on Facebook :  https://www.facebook.com/WhoKilledNancyJohnson/

Here's what vocalist Stefan had to say about the new single.....

"Our approach to song-writing has changed a fair bit since the material for our previous Cops and Robbers EP was written. Then, the songs were mainly written by Paul Anthony and me, and the writing was all done away from the rehearsal room. But since Pete Moulton joined on guitar we've become a band that jams things out.

"Dark Horse is typical of how it tends to work now. The song started with a riff Pete played in rehearsal. He plays a lot of riffs - guitarists never stop making noise! - and every so often one takes off, as this one did. Mark Wren joined in on drums and Paul on bass - me singing random words to find a melody line that worked - and everyone chipped in ideas for dyanmics, where the riff could go next and so on. Quite early on the 'I believe' line was fixed, and with that in place I wrote a set of words around it that didn't work and then a second set that stuck. The song probably took five rehearsals or so to settle down to its finished form. We'd work on it 20 minutes one week, an hour the next, 30 minutes, whatever.

"The Flat Earth Theory EP was recorded live initially, with Pete, Paul and Mark playing the song just as they would live. After a couple of weeks living with the raw recordings I went back in to do the main vocal. That was day two. Day three was going to be mixing - but then Paul left the band and said he didn't want his bass lines used on the recording.

"That threw us a bit because it meant we'd have to overdub the bass. Pete could have done it and so could I, sort of, but neither of us had played bass in anger in years. Fortunately a friend of a friend came to the rescue and did it for us. I'd love to tell you the name of the mystery bassist! - but we were asked not to say as the person concerned is involved in another band and was kind of moonlighting. Anyway, it got us out of a hole and meant we could move on to redo the backing vocals and get the songs mixed and mastered straight away.

"We always planned to issue a single before the full EP, and for a long time we had another track in mind. But everyone we talked to said we should release Dark Horse, and we had people coming up to us at gigs saying they liked the 'I believe' song in particular, so it had to be Dark Horse in the end.

"As for the Dark Horse video, that's based on an animation by Daniel Hallam that Pete found on YouTube. Pete contacted Daniel and got permission to recut it to fit the song, sticking in a little bit of band footage at the right moments. The original film and the song are kind of on parallel tracks, dealing with different angles of the same basic preoccupation, which is a tension between inner life and what's outside in the world. Added together I feel they both gain a layer of meaning from each other - the song means more and so does the film. Does that sound poncey and pretentious? Fuck it, too late, I said it and it's true."

Outside I’m the same
I say the same things people say
I play their simple games like naming faces, facing names
I turn the other way when fires start I’m not to blame
I throw the match away my fingers itching from the flame

I believe a dark horse is inside of me
The sense I make, the sense I make is make believe
A different kind of fantasy is burning me inside
Takes me for a ride

I believe a dark horse is inside of me
The sense I make, the sense I make is make believe
A different kind of fantasy is burning me inside
Takes me for a ride
And tells me to go
Get on with the show