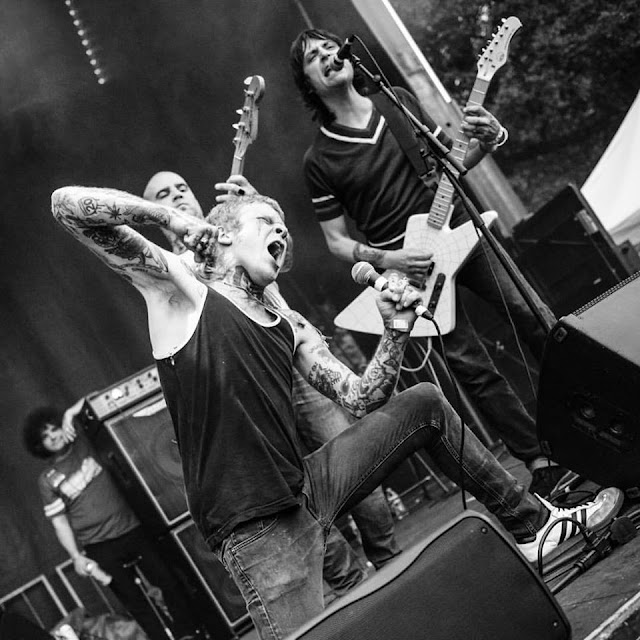 Don't panic, you haven't lost a couple of days, it's not Friday yet. I was sent a couple of guest reviews by Ed Stuart so I'll sneak one in today and post the other in a couple of weeks. For those unfamiliar with Ed, he's appeared a few times previously on here as vocalist/guitarist with his band Radiohearts.

He's also responsible (along with J Castro) for the excellent Audio Ammunition blog which I've just noticed has posted their best of 2017 list so I'll be checking that out as soon as I've finished writing this....  http://audioammunition.blogspot.co.uk/

If you've heard Radiohearts brand of catchy power pop/punk music, it won't come as a surpeise that Ed's chosen to review an infectious earworm of a song. Over to you Ed.....


RMBLR had an EP, Territory, that came out early last year on Fat Possum. Okay, so who is RMBLR? RMBLR is the latest of the ATL (Atlanta) bands that have been playing ‘70’s influenced punk n’ roll in the last few years like Dinos Boys, Barreracudas and Biters. RMBLR arose from the ashes of Dinos Boys. Actually, they were Dinos Boys touring band or better known as the The Filthy Few.

RMBLR is an ATL and Baltimore connection made of Dinos Boys and Sleigh Bells members fronted by Chase Tail. The song of the day is “Name Game.” Yes, it has the same title as the Shirley Ellis song or maybe is better known as the song Jessica Lange sang in American Horror Story when she lost her marbles. Whether this is a cover, a re-working or whatever, this song is catchy as hell. This version of “Name Game” is a lyrical back alley tour of bad choices with such characters as Ill Jill and Young Dick just to name a few. The backbeat is 70’s Thunders/Heartbreakers with Ramones touches and Chuck Berry sitting in on lead guitar.

RMBLR already has an upcoming single on Die Slaughterhouse that you will want to look out for.