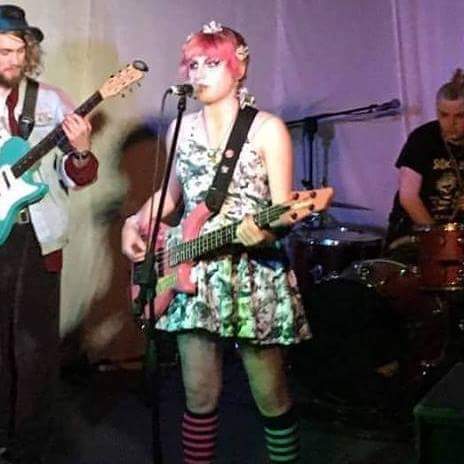 I'm sure we all have those moments when you're browsing for new music, randomly clicking links, listening to music more in hope than expectation, and then BOOM! You come across something that slaps you round the face and sends a shiver down your spine. Today's update features one of those kinda songs.

The Fleas are a relatively new band (they formed in the Spring of 2015), they're from Brighton and Hove and after a line up change earlier this year comprise of Emily Condon, Karlos Collins and Hugo Beynon. They announced themselves with a name your price demo and followed it up with the 7 track Live At The Windmill release. You can snap up both of them here : http://thefleas1.bandcamp.com/.

Good as those were, they've come on in leaps and bounds if their debut "proper" single is anything to go by. This is going to end up being one of 2016's best eps so make sure you check it out : https://anthraxuk.bandcamp.com/album/the-fleas.

She's an evil bitch with an appetite for despair who'll tear people apart just because she can, and what's more she doesn't give a shit. This is Heart Breaker. Be prepared to be mightily impressed......

Email ThisBlogThis!Share to TwitterShare to FacebookShare to Pinterest
Labels: 2016, punk, The Fleas