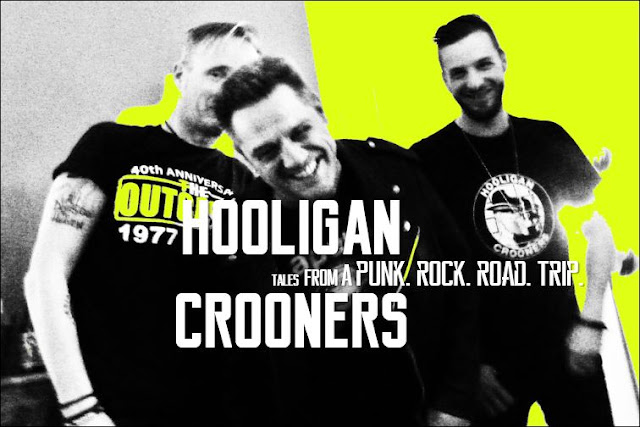 A few weeks ago, you may remember I posted a joint interview with Barry from Hooligan Crooners and Jim from B-Leaguers ahead of the release of their split mini album Tales From A Punk Rock Road Trip ( http://justsomepunksongs.blogspot.co.uk/2017/02/interview-with-b-leaguers-and-hooligan.html ). Both bands had previously appeared on here and had already released some great music so there was little doubt the album would be a winner. I possibly wasn't expecting it to be this good though, certainly their best yet. If you haven't yet heard it then you need to  https://hooligancrooners.bandcamp.com/album/tales-from-a-punk-rock-road-trip-split-with-b-leaguers

Knowing that both bands were releasing new videos I was intending to feature them both together in a joint update but as the Hooligan Crooners video has now been released and we're still a couple of weeks away from the one by B-Leaguers, I'm far too impatient to wait so I'll cover them seperately.

As I've already featured both bands, I don't need to repeat the info on them, aside from mentioning that they're sharing a bill together at The Mulberry Tavern, Sheffield, on March 31st and The Treaty Of Commerce, Lincoln on 1st April. Hooligan Crooners have a number of other gigs coming up so to check out venues & dates go here https://www.facebook.com/hooligancrooners/

Keep your eyes peeled for the new B-Leaguers video but in the meantime enjoy this excellent one by Hooligan Crooners. Story telling punk at it's best (think The Boys, Rancid, Social Distortion etc), this is It Goes Like This......