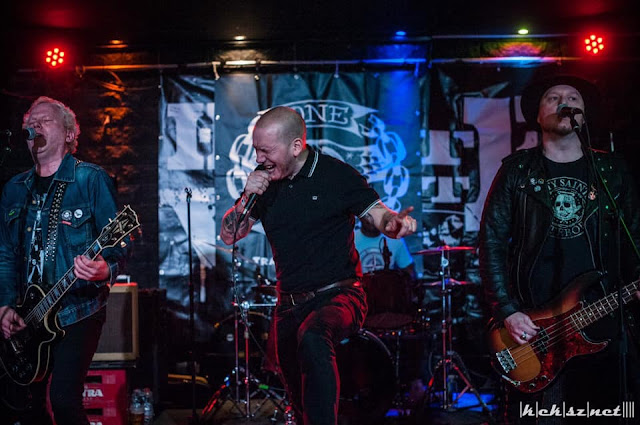 City Saints (https://www.facebook.com/citysaintsgbg/) are a working class street punk band from Gothenburg who've been together since 2012 and feature a line up of Stefan Johansson (vocals/harmonica), Gabriel Aadland (guitar/vocals), Carl Linnaeus (bass/backing vocals) and Robbin Larsson (drums). They've released 4 albums and a string of singles and list amongst their influences the likes of Sham 69, Cock Sparrer, Slade, Motorhead, Little Richard, Chuck Berry etc...

They've a new single and it's a rather cool collaboration with legendary Peacehaven punk Peter Bywaters (no introduction needed for him but if you really want a bit of info look here :     https://justsomepunksongs.blogspot.com/2015/03/peter-test-tube-babies-run-like-hell.html)

The single will be available via the ever reliable Sunny Bastards Records on limited edition various beer coloured vinyl https://shop.sunnybastards.de/Music/Vinyl/City-Saints-Peter-the-Test-Tube-Babies-on-the-Radio-EP-Mexikaner-colored-Vinyl-100-copies::3543.html

There'll be 3 tracks, covers of the Peter And The Test Tube Babies classics Givin Up Drinking and Alcohol plus the title track. This is the entertaining video for that one. Pissed and proud since '78, banned from the pubs since 1982 but they're still going strong in 2020, still playing punk rock n roll. Something we should hear more often, Peter And The Test Tube Babies On The Radio...