Atomic Eater - Hope U Die Too 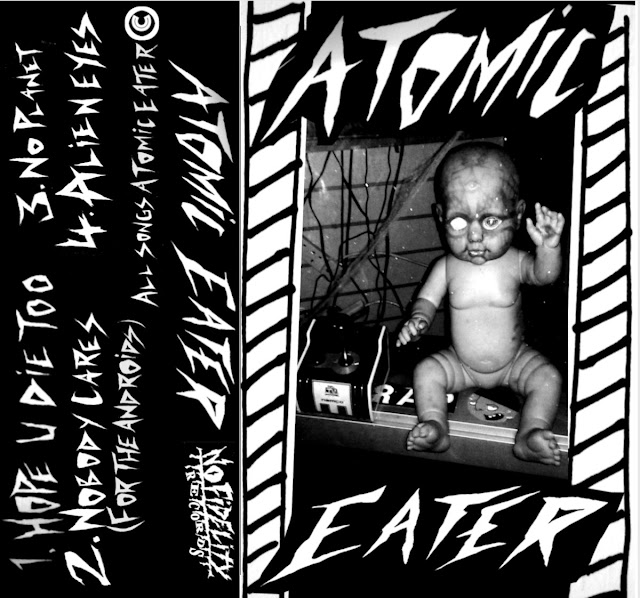 Cast your minds back to September. Do you remember a "71 second blast of scratchy, lo fi nihilism  courtesy of the wonderfully named Kool & the Gang Bangers."  They're from Little Rock, Arkansas and reminded me of Buck Biloxi And The Fucks. If you don't fear not, you can check it out here :   https://justsomepunksongs.blogspot.com/2019/09/kool-gang-bangers-hate-world.html

I didn't know much about them at the time (and still don't) but I got a message last week from someone called Vince Cent who said "Hey you're the guy who did the review of Kool & the Gang Bangers tape I put out few months ago?? Here's another project I put out the same week I think you'll like it" And he was right, I do. Despite Kool & the Gang Bangers hailing from Arkansas, this new project hails from Sweden and are called Atomic Eater. I asked Vince for a little info and he says "the first 4 song tape I wrote and recorded one day in my kitchen in Sweden a few months ago and call it 'apocalypse rock' and the new demo I put out yesterday. I'm looking at putting out an LP early next year when I got the time between other projects." I'm assuming one of those other projects are another band that recently featured on here, Suicide Generation, as Vince plays guitar for them :   https://justsomepunksongs.blogspot.com/2019/10/suicide-generation-prisoner-of-love.html

Anyway, the new demo he mentions is called We're All Dying (On The Inside) and you can find it on Bandcamp along with the song I'm posting today : https://atomiceater.bandcamp.com/

This is the opening track from the ep, again reminding me of Buck Biloxi And The Fucks, and it's titled Hope U Die Too...