Radical Kitten - The One The First (Guest Review By Jim Lachlan) 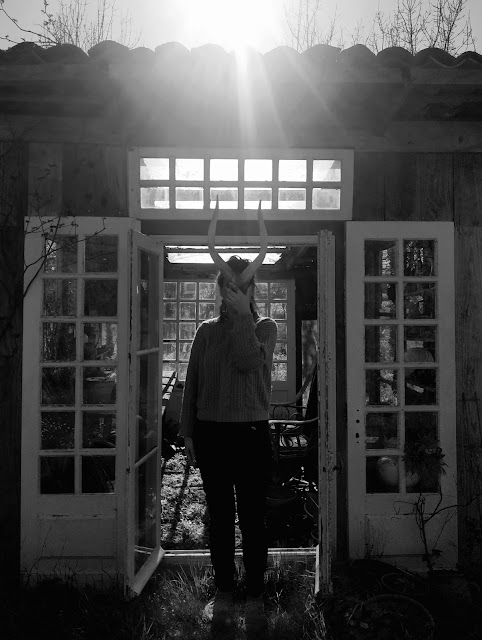 Obviously with so much great music being released during 2020, some bands were always going to slip under the radar and one band I missed out on were French feminist/queercore punks Radical Kitten (https://www.facebook.com/Radical-Kitten-2269316249827120). They're from Toulouse and last October saw them release an album called Silence Is Violence. They were brought to my attention by Jim Lachlan who said they had a hint of Perth's finest Cold Meat (https://staticshockrecords.bandcamp.com/album/hot-and-flustered) to their sound. I checked them out and was very impressed so asked him to say a few words.
Cheers Jim...
Radical Kitten - Toulouse trio (Marin : bass & vocals, Iso : guitar & vocals, Marion : drums) - Silence is Violence 12 track - Araki Records, Stonehenge Records, Domination Queer Records. 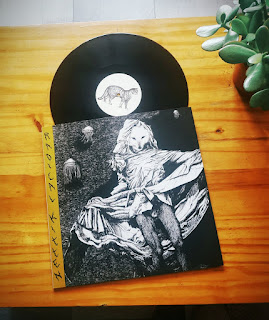 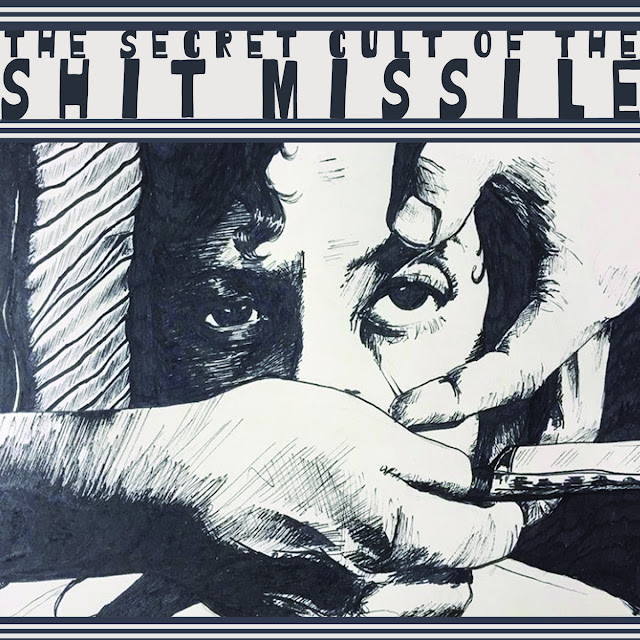 The Shit Missile are Oliwia (Guitar/Vocals) George (Guitar/Vocals), Angelito (Bass) and Ximo (Drums). They're from Germany (I think) and they've a debut single out on King Khan's Khannibalism Records.
It's 2 very good tracks which sound as though they're by different bands with one (Fuel Injected Dreams) featuring German accented female vocals by Oliwia and the other (What's The Score) boasting English accented male vocals courtesy of George Ramshaw. The single is titled The Secret Cult Of The Shit Missile and it's an extremely promising calling card. You can get it here : https://khannibalism.bandcamp.com/album/the-secret-cult-of-the-shit-missile
My favourite song is What's The Score (I'll be playing it on this week's Just Some Punk Songs show later today so listen in https://www.facebook.com/events/704615003489577) but I'm featuring the other one on here as they've made a video to accompany it.
This is Fuel Injected Dreams...
I hitched hiked with the devil His boots were burning flames I would tell him my desires He would show me all the ways The sky was glittery blue Radio played only rock n roll bands And I don’t care where we go Cause nothing goes well In the corn fields I met a man He was born under the black sun They said he’s forever cursed They wanted him dead So my gun got warm My eyes turned black We chained our souls together But i am never coming back I lost you in the land over mountains and the seas For years i tried to find you but this place was only in my dreams These are fuel injected dreams They ain't worth anything These fuel injected dreams They will go to hell with me
Posted by mickfletcher at 01:33 No comments: 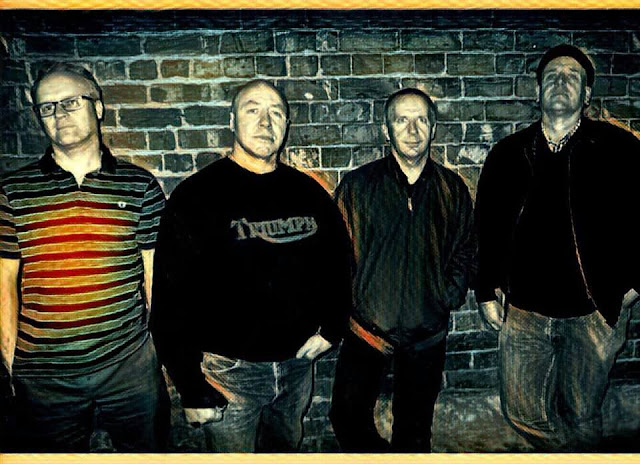 The Struggle (https://www.facebook.com/thestruggleuk/) are a street punk / oi band from Darlington who feature Chris Wright from Crashed Out (they featured on here last month (https://justsomepunksongs.blogspot.com/2020/12/crashed-out-lockdown-blues.html). Alongside him (and rather confusingly) is Gimp Fist bassist Chris Wright as well as Laze (drums) and Tom Chapman (guitar).
Due to other commitments the band called it a day back in 2019 but they've left a "last will and testament" in the form of a 2 song ep which is out now on Pirates Press Records. The band has decided that all proceeds from the release will go to BOOM in Leeds. BOOM is a grassroots venue near and dear to the band’s hearts which has played host to many punk, metal, and rock gigs throughout the years, and like most independent music venues, can use help amidst the COVID-19 pandemic. BOOM LEEDS is now on the brink of permanent closure due to Covid-19 and needs to Crowdfund to survive. In the absence of any income and being unable to open - the venue has accrued substantial debts that will force the venue into permanent closure. Any profits from this release will help keep the wolves from the door. http://www.boomleeds.com/
Unsurprisingly, given the pedigree of the band members, the ep is a winner. Anthemic choruses and gang vocals abound. It's a fitting farewell that'll go down a storm with punks and skins everywhere. You can get it here : https://thestruggleuk.bandcamp.com/album/tension-rising-its-not-too-late
This is Tension Rising...
Tension rising a hot summers night On the British streets the time was right Get taste of your own medicine From the people you look at with disdain Tension rising British youth At the bottom Accepted by none Rise up, riot British youth Too much pressure that was the truth A forgotten generation that didn’t fit in Stop and search and don’t question We got you now man we got S.U.S You don’t fit in and you’re not like us Tension rising British youth At the bottom Accepted by none Riot riot British youth Too much pressure that was the truth Complete control with a push and a shove Following the orders from above Too much pressure What did they expect From the detached youth what happened next It didn’t work out they saw through the shit And a petrol bomb destroyed their dream A burnt out car and anarchy A suppressed but united community
Posted by mickfletcher at 02:28 No comments:

Bent Out Of Shape - Paying Tribute 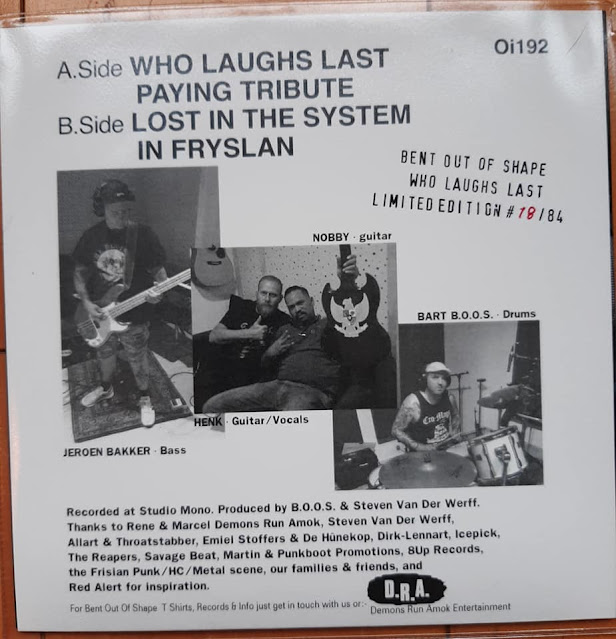 I've got to be honest, after enjoying plenty of oi releases over the last few years, I didn't hear too much from that genre during 2020 that excited me. Hopefully it was Just a case of the bands I like preparing new material for release this year. I think I'd choose Takers 'N' Users' Tales Of This Town as my favourite oi album of the year but a new band that also impressed were Bent Out Of Shape (https://www.facebook.com/BentOutOfShapeOi). They're from The Netherlands and they released an impressive demo back in April (which I described as hard as nails bovver boy music :  https://justsomepunksongs.blogspot.com/2020/05/bent-out-of-shape-divide-and-conquer.html). 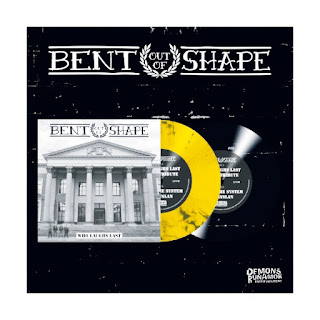 They returned at the back end of the year with an excellent 7" on Demons Run Amok (https://shop.demonsrunamok.de/en/musik/9556-16153.html) titled Who Laughs Last.
It's 4 tracks that'll appeal to fans of Blitz, Cock Sparrer, The Beltones etc with the title track revealing that though this is a new project, the members of the band are genre veterans who have carried on with their passion of making music despite being told they'd be better off getting proper jobs. Lost In The System is about struggling to get by and how we should pull together to survive whilst the closing track is a love letter to their home of Fryslân.
You can stream it here : https://demonsrunamok.bandcamp.com/album/who-laughs-last
This song is about being proud of their skinhead roots and it's called Paying Tribute...
Music for hooligans And the oppressed Skinheads on the rampage Skinheads in sta-press Up to evil conduct Razorblades in the night We fight to live - We got a fight! The culture, the classics And all of the above It's the style that we like And the music that we love Don't forget the struggle Avenues and alleyways We're paying tribute To those glory days! Bloodshed on the street The city's in a jam Won't say sorry to anyone I'm proud of who I am Suburban rebels Who never fall So join the rejects and Let’s take ‘em all! CHORUS State of emergency We're infa riot Backstreet kids Can't stand the peace and quiet It’s gang warfare In garageland All coppers are bastards They don’t understand! CHORUS
Posted by mickfletcher at 23:44 No comments:

Email ThisBlogThis!Share to TwitterShare to FacebookShare to Pinterest
Labels: 2020, Bent Out Of Shape, oi, street punk 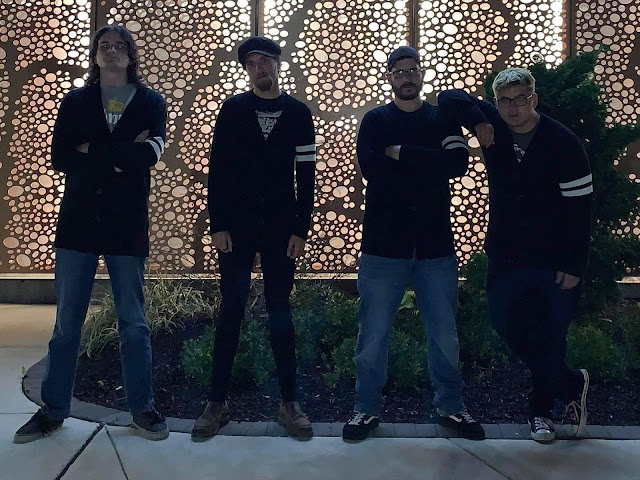 Ralph returns today to sing the praises of a band that he thinks everyone should hear. They're a 4 piece pop punk band called Lettermans (https://www.facebook.com/LettermansOfficial) and they've been around for a couple of years. They released their debut album towards the end of 2020 and though it escaped my attention until Ralph started raving about it, I'm now a convert.
Over to Ralph...
So after 2 amazing EP's, Philadelphia's favourite sons of Pop Punk have dropped their full length CD "It's Not Me, It's You". Back in February of 2020 before everything went to hell I watched these guys and Radio Blast hold their own against scene veterans!  I became an instant fan and let me tell you this - THIS is not your standard Pop Punk! This album blends obvious Beach Boys influences with more traditional Power Pop leanings to make it a stand out in the field. You got amazing songs like "How Could She" and "To Be A Gentleman" but being the Surf Punk I am I'm gonna post the video for "Surf's Up" because it just flat out rules! 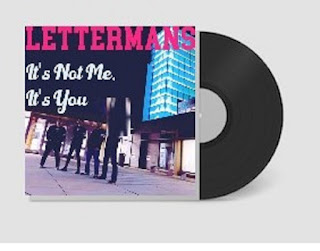 You can get the album on vinyl from Punk Head Records https://punkheadrecords.com/ and it's also available digitally : https://lettermansofficial.bandcamp.com/album/its-not-me-its-you
Accompanied by a fun video (good looking young people having fun at the beach with sunshine aplenty looks so inviting when your stuck indoors due to Covid induced lockdown), this is one hell of an earworm. Surfs Up...
Posted by mickfletcher at 23:45 No comments: 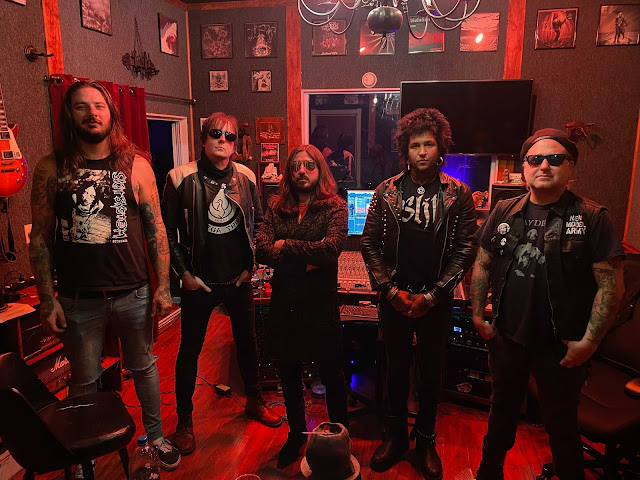 I was wondering what to post today and then I came across this really cool UK Subs cover and my search quickly came to an end.
The Wraith (https://www.facebook.com/TheWraithPunk) are a dark punk/deathrock band from Los Angeles and line up with Kaz Alvis (guitar/vocals), Davey Bales (vocals), Anatolii Lövochkin (drums) and Paul Rogers (bass/vocals). Their sound mixes up elements of 80's UK post punk (Death Cult, Killing Joke, Chameleons) with Southern Californian deathrock (T.S.O.L., Samhain) and their 2019 debut album, Gloom Ballet (https://thewraithsl.bandcamp.com/album/gloom-ballet), saw critics hurling glowing reviews in their direction. 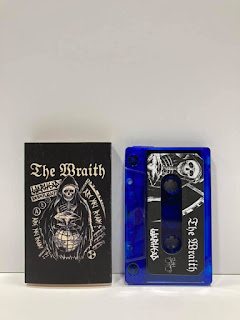 And now they're back with a split cassette with Cheltenham horror punks, Screaming Dead, who contribute a song called Pretty Mess (https://screamingdead.bandcamp.com/track/pretty-mess). It's the first release in a series of monthly split cassingles from Plain Disguise records and it's a very impressive opening instalment.
So the UK Subs cover; it's a darkly delicious take on a classic. It's called Warhead...
Posted by mickfletcher at 23:48 No comments:

Email ThisBlogThis!Share to TwitterShare to FacebookShare to Pinterest
Labels: 2021, deathrock, punk, The Wraith 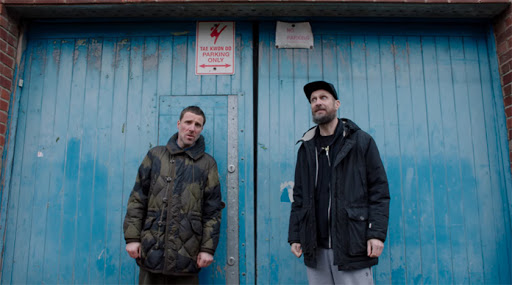 Occasionally I'll start these write ups by saying something like "Here's a band that always go down well when I play them on the show" but if I'm honest, I find that whenever I play Nottingham electro post-punk duo Sleaford Mods (https://www.facebook.com/SleafordModsOfficial/) the chatroom is split down the middle between lovers and haters (with hardly anyone not having a strong opinion). Not sure why so many punks don't get them as personally I think they're great and have much more in common with the spirit of punk rock than may punk bands do. But fuck you chatroom naysayers, even though I love you and respect your opinions, you're wrong. And you'll have to put up with them again on next week's show!
I'm sure you'll know by now that they've a new album titled Spare Ribs out on the 15th January. It'll be on Rough Trade and if you're quick there's a very fetching transparent orange vinyl version :  https://store.roughtraderecords.com/products/sleaford-mods-spare-ribs 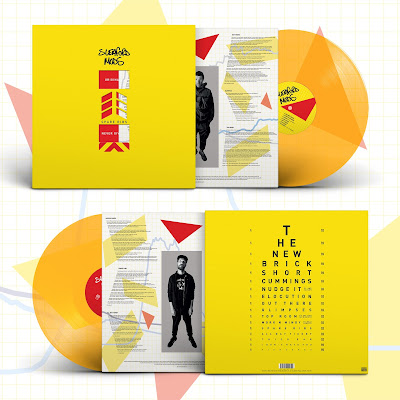 Lead single Mork N Mindy (which featured a guest appearance from hot newcomer Billy Nomates (https://invada.bandcamp.com/album/billy-nomates) and 2nd teaser track Shortcummings presented evidence that the album would be up there with their best and now they present one final submission in the form of a collaboration with Amy Taylor (who you'll know from Amyl And The Sniffers  https://amylandthesniffers.bandcamp.com/).
I'm sure that when Spare Ribs is delivered on Friday, the jury will return a very positive verdict.
https://sleafordmods.bandcamp.com/
This is Nudge It...
Posted by mickfletcher at 23:47 No comments: