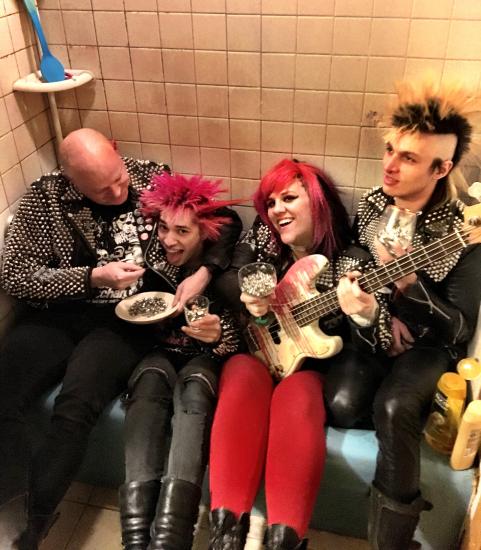 Who Killed Spkey Jacket are the pogo punk band from Boston, Massachusettes, who previously appeared on here back in 2014 with their reworking of the UK Subs' classic, Warhead (http://justsomepunksongs.blogspot.co.uk/2014/12/who-killed-spikey-jacket-gluehead_10.html).

They formed in 2010 and announced themselves the following year by way of a split album with Leicester band The Wankys and have since released numerous eps & splits on labels such as Total Fucker Records, Joe Pogo Records etc. There's was also 2015's S/T compilation album. Recently they returned on top Japanese label Pogo 77 Records with new ep, Sleepytime Punks.

As with all their previous releases, the new material is great fun. It's in your face, bounce around the room punk in the vein of the likes of The Casualties, Tom And Boot Boys, Discocks etc. Released to coincide with their Japanese tour it's a definite winner.

You might have to turn up the volume for this video but it's well worth it. If you're a punk, you must wear studs. If you don't, What's Your Excuse?