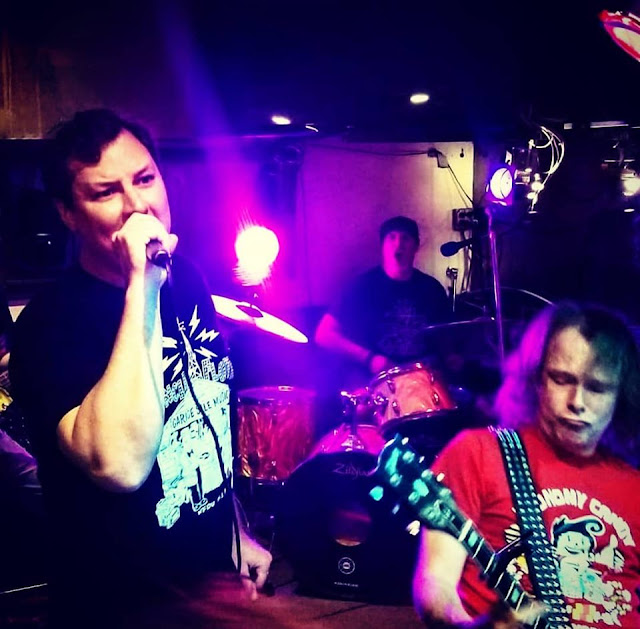 As you may have noticed, not being a proper writer I don't really do reviews. These few paragraphs are more introductions to the day's song than a review but nevertheless there's still a little bit of added pressure on me today to write something decent as the last time I featured Brooklyn punks World War IX on here they used part of my write up to promote their new ep. I called them "an adrenaline rush, a band with fire in their veins. A throwback to the 80's when the term faster and louder reigned supreme" which isn't exactly exactly going to have proper reviewers worrying about their jobs being under threat but wasn't bad for me. This time round I'm going to have to reinforce that 80's hardcore punk vibe I get from these guys and tell you that the 5 track Phoning It In ep is akin to getting into Dr Emmett L. Brown's retrofitted DMC Delorean and heading back to an era when throughout a Reagan led country, sweaty teens were going wild down their local flea pits to some of that period's most beloved bands. Those teens might be a little older and greyer now, and their t shirt sizes a little larger, but they'll still be working up a sweat as they mix with an appreciative younger generation as World War IX give it their best shot at carrying on the legacy of their heroes. In Johnny C they've a frontman with a perfect voice for this kind of thing. He definitely brings to mind the likes of Jello Biafra or Henry Rollins (I doubt very much it's coincidental that the song you'll find at the bottom of this update reminds you so much of Black Flag's TV Party). He's ably backed by a band that's both talented and energetic; Justin (guitar), Mike Moosehead (guitar) Brian 'Chinatown' Jackson (bass) and Jon (drums).

Don't listen to the reviewer though, no matter how much he's flailing around trying to paint you an accurate picture, just click on the link to the music and make your own mind up :   https://worldwarix.bandcamp.com/

So, here's the raison d' etre for this blog, the song. They've just released a video to accompany it and if any of you guys are a member of the Just Some Punk Songs group on Facebook the graphics may look a little familiar (https://www.facebook.com/justsomepunksongs/). The band's guitarist Justin Melkmann is a talented artist who not only produces his own comic books but who kindly contributed the artwork for the JSPS page. Now his work graces the new video. If you've read Justin's illustrated history of the band in the comic books you'll know it's quite possible this song is autobiographical. It's called Fired For Partying...