The Chats - Do What I Want 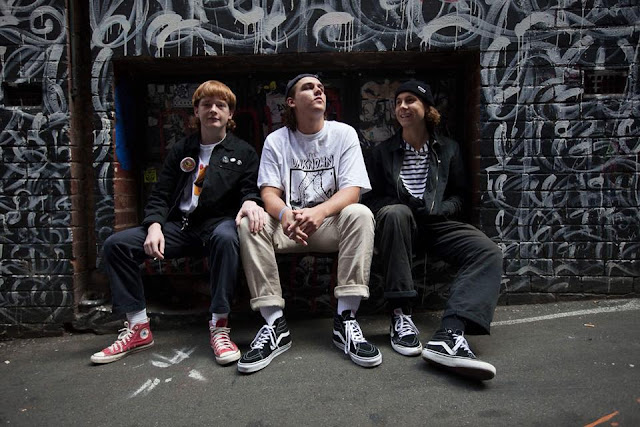 Over the last few week's I've been putting together a special Just Some Punk Songs show that'll feature a playlist of new(ish) Australian punk music. I've pretty much got an hour's worth of songs (I've just been hanging on a bit to see if there were any more songs released from upcoming albums by 2 of that country's hottest new bands The Chats and Amyl And The Sniffers). There was a new single released by The Chats last month to coincide with their first headline tour of Australia but I'm going to play that on this Tuesday's show instead and I'll also post it on here today.

As mentioned last year when sharing Smoko (many peoples highlight from the Get This In Ya ep and also the flip side of the new single), The Chats are from Australia's Sunshine Coast. The line up of the band is Josh Price (guitar), Eamon Sandwith (bass/vocals) and Matt Boggis (drums). They've only been together for a couple of years but they've caused quite a stir. Following in the footsteps of Amyl And The Sniffers, they'll be playing (no doubt packed) shows in the UK and Europe in October and you can find details here :  https://www.facebook.com/thechatsband/

No more details on the album yet but from the amount of love they get from the people in the chatroom when I play their songs I know it's one of the year's most eagerly awaited. If you missed their earlier releases you can catch up here :  https://thechatslovebeer.bandcamp.com/

The single, the first taste of what we can expect, is more of the "couldn't give a fuck mate, we're Aussies" kind of punk that we now expect from them. Not for these guys concerns about the troubles of the outside world, they're more bothered about their hum drum everyday existence. Just leave them alone to live their lives at their own pace and don't tell them what to do.

Email ThisBlogThis!Share to TwitterShare to FacebookShare to Pinterest
Labels: 2018, punk, The Chats