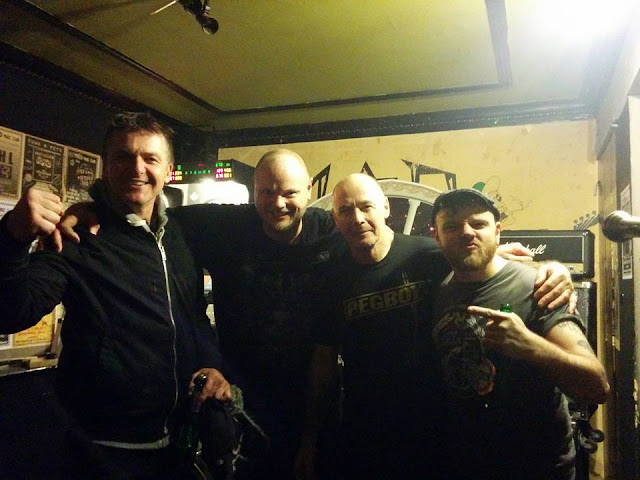 Last year I posted an excellent song called Missiles On The Roof by Manchester band Holiday. Earlier this year Holiday released a split ep with another great band, Epic Problem. The song's that Epic Problem contributed to that ep have just resurfaced on a compilation album called '11-'14 which collects together all their material thus far and it's one of those songs that I'm posting today.

Epic Problem are from New Mills, Derbyshire, and as hinted at by the title of their album, they've been together since 2011. Their first release was the 3 track Battles ep, this was followed in 2013 by the 6 track All Broken. 2014 saw them release the Lines ep and this year it's been the split with Holiday and the compilation. You can check them out here : https://epicproblem2.bandcamp.com/.

They describe their music as melodic and angry street punk, their guitarist Mackie (Neil McLennan), was previously a mainstay of another New Mills band, Blitz. Also in the band are Jake McCullough (vocals/guitar), Anthony Morrison (Morry) (bass/vocals) and Simon Dunnington (drums). Their sound owes a debt to all your favourite gruff voiced melodic punk acts, think of the likes of Leatherface, The Beltones, Off With Their Heads, The GC5 etc.

One of my favourites of theirs, this is Petrol Blue.....


Petrol blue was the colour of the sky that day When we plotted and we schemed, we planned out getaway Gotta get out of this Godforsaken one horse fucking town And I'm never coming back, I'm never turning round And the grass might not be greener Doesn't matter, I'm colour blind The streets might not be paved with gold But I know to me they'll shine Gotta get away from small minded small town mentality Away from casual racisim and cod philosophy But it's a long way down from the top back to the bottom Tired of everybody getting in your face Yeah, it's a long way down from the top back to the bottom When you hit every branch along the way Bitter sweet was the taste in the air that night Razor sharp was the thorn that stuck into my side Anachronistic plotted history I've heard a thousand fucking times You're a living premonition just to ugly to disguise And as I write away my chance to get away as far as I can My past ingrained into my future as I fall back down again Those satrs shine brightest on the darkest nights Bit I long for the days With all my dreams infront ofme Behind that petrol haze