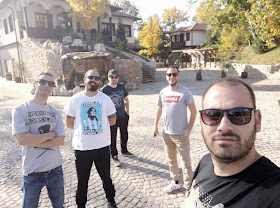 You might think you don't know of Barry Phillips but maybe you actually do. If you're as old as me maybe you remember Blitz Boys' 1980 single Eddy's New Shoes? Barry sung that  https://www.youtube.com/watch?v=TNC1-Mgbts0

The following year he joined Demob, just in time to play bass on their classic No Room For You (https://www.youtube.com/watch?v=1BgSrBYqbH8).

If you weren't around back then, maybe you've heard his most recent band, Hooligan Crooners?   https://hooligancrooners.bandcamp.com/

He's done some great stuff down the years and his new project is a book called In Search Of Tito's Punks. The intriguing description of the book begins : How did a song recorded in 1981 by a young multi-racial punk rock band from a ‘stagnating provincial English city’ and released on a tiny independent record label become famous in a Yugoslavia formed in the image of Marshall Tito? Why did it take 30 years before the members of the band found out? How was it that this ‘communist’ country had one of the most vibrant punk-rock scenes in the world? Who were ’Tito’s punks’ and who are they now? You can find out more here : https://www.amazon.co.uk/Barry-Phillips/e/B083DXLQP8/ref=dp_byline_cont_ebooks_1

Anyway, when he recommended a new song to me by a band called Punkreas I wasn't going to miss the chance to let him review it himself so I'll hand you over to him....

https://www.facebook.com/PunkreasNiksic2003/
Punkreas hail from Nikšić in Montenegro, about 50km north of the capital Podgorica. Nikšić is an industrial city of 56,000 population and the economy is based on steel, mining and breweries. But, like many cities in the region, it has experienced some tough times since the breakup of Yugoslavia, with the wars being followed by a devastating economic depression. You might suggest that such adversity is fertile ground for punk rock and, sure enough, in 2003 Punkreas was formed - comprising Dabo-vocals, Bula- guitar/vocal, Vela-bas/vocal, Kendy-guitar/vocal and Djola-drums. To date they have released three albums and two singles and have played every major city in ex-Yugoslavia, many festivals, and made a few trips to ‘Europe’.

I first became aware of them when Djola (who I know as Ðorđije) contacted me to offer to help with a book I was writing about punk in ex Yugoslavia. He then told me about Punkreas and sent me a link to a video they had made. The 'actor' in the video is a former heavyweight boxing champion from Nikšić who is battling with Multiple Sclerosis. Heartwarmingly, the legendary Vladimir Klitchko (who he boxed professionally in 1999), has been sending him expensive medicines from Germany and the two have developed a friendship. The song is called “Nije kraj” (It's not the end) and the video is worth a look – particularly if you're interested in boxing histories  https://www.youtube.com/watch?v=ZawEIpdiQP8

Anyway, Punkreas have just released a new single, “Za vas” (For You), which is an absolute belter of a track. It's unmistakeably 'Balkan' but it's fair to say that if you're a fan of peak Social Distortion, or perhaps Lars Frederiksen or The Angelic Upstarts, you'll love this. There's plenty here for most people to enjoy – it jangles, chugs, then explodes into rage but has one of 'those' melodies – at once joyous, poignant and defiant. It has a cracking singalong chorus (don't worry the words are below or you can just sing the “Za vas” bit 😊 ). “Za vas” is a song about people who keep quiet and don’t raise their voices against the injustices in society. Yugoslavia had one of the most dynamic punk scenes in the world. As the country fragmented, so did the scene. But it’s obvious from bands like Punkreas, Hund, Pogonbgd, Trnje, Shoplifters etc that bands have since emerged who continue to fly the flag for punk in the ‘successor’ states.

You can check out their music here : https://punkreasniksic.bandcamp.com/

Do you dream awake? Is this reality? Who creates your fate? A common question that reality hurts, do you hate the figure in the mirror?

CH: For you, who are silent, You that crapped out, who sells your future, I raise my voice because we are not all the same, I have principles and I'm standing behind them.


Close your eyes, keep your head down, you have already learned that, explain to your children how you crawled, with your own free will, you become slave.