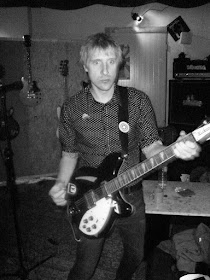 A top 10 for you today chosen by Justin Maurer who as well as being guitarist & vocalist in Suspect Parts has also been a member of several other bands including Clorox Girls, Red Dons and L.A. Drugz. I posted a Suspect Parts song a few days ago which was taken from their new S/T album. You can check out the album here :  https://takenbysurpriserecords.bandcamp.com/album/suspect-parts-lp  and you can find details of their forthcoming European tour here :  https://www.facebook.com/SuspectParts/

Many thanks to Justin for selecting his Top 10.....

Something about the quality of Roy's voice just hits you in the gut and in the soul.  It's all here, the tragedy of a beating hungry heart.

Here we have teenage longing paired with perfect soaring harmonies.

Maybe there's nothing better than the sound of Pete Shelley going Oh ooh woa ooh woa. And when he goes, Just me and you...aaawww at the very end of the song...pure bliss.

A beautiful song full of sentimental melancholy and loneliness. Brian Wilson is a genius. It's also like a pep talk for the self. Now it's dark and I'm alone/
But I won't be afraid/In my room/in my room

Pretty damn close to perfection. It sounds like drinking bourbon and smoking cigarettes in 1971. As well as Delta Blues and Chicago Blues, these guys love honky tonk country music, the Bakersfield sound, Buck Owens. Even though Jagger's forced American accent is over the top, somehow it doesn't affect the authenticity of the tune. Take me down/little Suzie/Take Me Down


6)  RICHIE VALENS - We Belong Together

Richie was a yearning, lovelorn teenager in high school when he wrote this song and you can hear it in his voice. He was taken from us too soon.

Jezebel was a 1950s pop music standard covered many times by dozens of bands including The Everly Brothers, Gene Vincent, and Herman's Hermits. In 1978 The Controllers from L.A. did a savage punk rock version. To me this is what punk should sound like.They had a black female drummer Carla "Mad Dog" DuPlantier who may be the only female black punk drummer from the late 70s that I know of? The Controllers also recorded a a song called "Neutron Bomb" before The Weirdos did, but the Weirdos version is definitely the better one.

Steve Marriott was a wailer. The Small Faces may have been small, but they were tough as nails. All Or Nothing is as much a call to arms as it is a love song. Alright! All or nothin' AAaaahhh yeaaaaaah

Plenty of people stick their noses up at The Doors and Creedence and they shouldn't.  The lyrics of this song especially resonate with me. If I only had a dollar/For every song I've sung/And every time I had to play/While people sat there drunk

This song has brought me to tears multiple times. Absolutely beautiful.
Will the last American band to get played on the radio
Please bring the flag?
Please bring the flag!
Glitter disco synthesizer night school
All this noble savage drum drum drum
Astronauts go back in time to hang out with the cave people
It's about time
It's about space
It's about some people in the strangest places
Woody Guthrie sang about
B-E-E-T-S, not B-E-A-T-S
I must not think bad thoughts