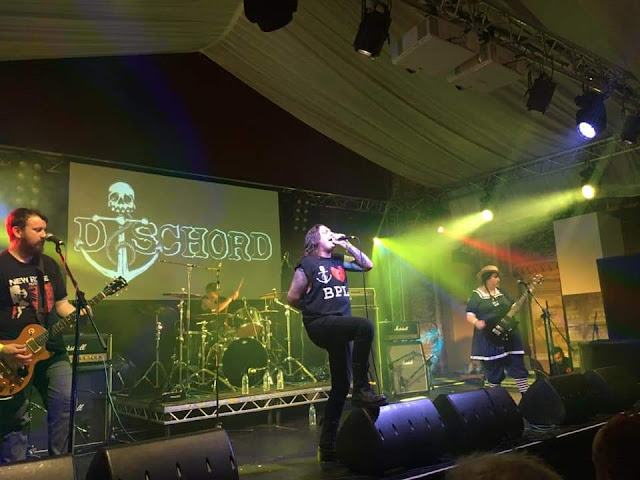 In the words of Edwyn Collins, "Rip it up and start again..."

Dischord are the Blackpool band who impressed back in 2016 with the concept album War Or Peace (a song from which featured here : https://justsomepunksongs.blogspot.com/2016/09/dischord-red-poppies.html). They've been together since 2011 and feature Chris Newton (vocals), Zowie Swan (bass), Dave Swan (guitar) and Jake Fenton (drums). They're currently preparing to release a new album, it'll be out on Oct 31st and will be titled Convent Crescent.

On the surface it's a soundtrack to a short horror film released by Chris and Zowie last year and as well as Dischord it features numerous other bands such as Soulcakes, Despairground, The Never Dead etc.  You haven't heard of those bands? Not surprising. Read on...

In March 2018, Zowie and I released a short horror film, ‘Convent Crescent’. We knew it was only the beginning of a much longer story. What we didn’t realise at the time was that it was also the beginning of a new Dischord album.In 2016 we released our third album, ‘War Or Peace’. It was our proudest achievement at the time; a concept album about war, death, love, forgiveness and, well, peace. The album’s final track, ‘Love’ became our favourite track to play live, and closed that album with our most important lyric: “They call me blind, but my name is peace. I am the silence when the guns have ceased.”The problem with writing your best album is the subsequent question: what comes next? Fast forward to 2019 – imagine a Hellish time-jump montage of Brexit negotiations, Theresa May dancing to Abba, Boris Johnson shuffling into no. 10, Tommy Robinson covered in milkshake, Mosque attacks, John Lydon sporting his ‘Make America Great Again’, school shootings and Donald Trump mocking the disabled – a post-satirical dystopia seemingly designed by Quentin Blake and Spitting Image on a particularly bad day. Ample fodder, we were repeatedly told, for a political punk band.But fodder for what, exactly? Evolution has always been integral to our writing process. We’ve never wanted to repeat ourselves. Ultimately, the point of ‘War or Peace’ was that war, political corruption, religious extremism, nationalism, terrorism and suffering are universal, self-perpetuating and doomed to continue indefinitely without drastic systemic upheaval… Despite the reign of leaders so grotesque as to be utterly immune to parody, nothing has changed. There is nothing to say we haven’t already said – and continue to say on stage every night. There are only so many punk songs you can write before they all begin to sound the same.

Having taken ‘punk’ as far as we could without repeating ourselves, we were faced with a dilemma: could we change our focus, push our style to the point where we risked no longer being ‘Dischord’? And, what the hell was ‘Dischord’ anyway? A band who played three minute fast, shouty songs, or four people pouring every ounce of their souls into their instruments?

Should we split up? Start a new band? That would be too easy. Should we grit our teeth and write a hardcore album about ‘Brexit Britain’? That seemed about the least punk rock thing we could do. That’s what you’d expect from us.

Why not evolve? Why not take a risk? As strange as it sounds now, Seaside Suicide was a risk. Prior to that we had never played hardcore punk. We didn’t know we could do it. We didn’t know if people would connect with it if we did.

So we set ourselves a challenge. Many artists we admired – David Bowie, Marilyn Manson, The Beatles – reinvented themselves from album to album, using new personas to find fresh perspectives and create new sounds. If they could reinvent themselves with each record, why couldn’t reinvent ourselves with each song?

What if Dischord wrote the soundtrack to Convent Crescent? 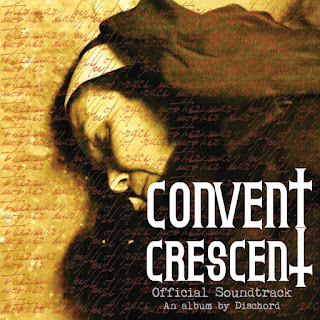 Ten tracks performed by ten different ‘bands’, each one of them Dischord in disguise. It was the perfect opportunity to shake things up. For me to get back behind the drums, to let Jake demonstrate his abilities as a guitarist and – more importantly – a producer, to let Zowie take on lead vocals, for Dave to hang up the Gibson and break out the Spanish guitars, 12 strings and effects pedals, to open our studio doors to a variety of guest musicians.

So began the creation of one the most insidious concept albums ever written. A novel and its soundtrack written simultaneously, with songs for once not written to flow together, but written deliberately to jar, to contradict each other, whilst surreptitiously forming an elaborate concept – a narrative told in secret.

We’ve always said that the album was the ultimate artform, the perfect combination of music, film, art and poetry. We’re taking that to its extreme with this album: A record, a novel and a short film all in one, combining to tell a complete story.

‘War or Peace’ declared love to be the solution, and we thought that was a full stop, but now we’re exploring what that actually means. ‘Convent Crescent’ is a story of love. It is also a story of death, rape, murder, demonic possession, sacrifice, addiction and loss because it’s written by the same damaged minds that brought you ‘The Wakes’, but ultimately it’s about love.

For our last album, we designed a set of tarot cards, featuring characters representing the albums’ themes: The Soldier, Death, Love, War and The Devil. ‘Convent Crescent’ is their story, and if you think we’re not angry, you’re not paying attention.

Intrigued? If you want to hear a band determined not to stand still it'll be available via Lickerish Records (https://www.lickerishrecords.co.uk/)  and you can pre order the album here https://dischorduk.bandcamp.com/album/convent-crescent-official-soundtrack

You can get more info here : https://www.facebook.com/dischorduk/

This is one of the songs on Convent Crescent, it's a dark delight and it's called Director's Cut...