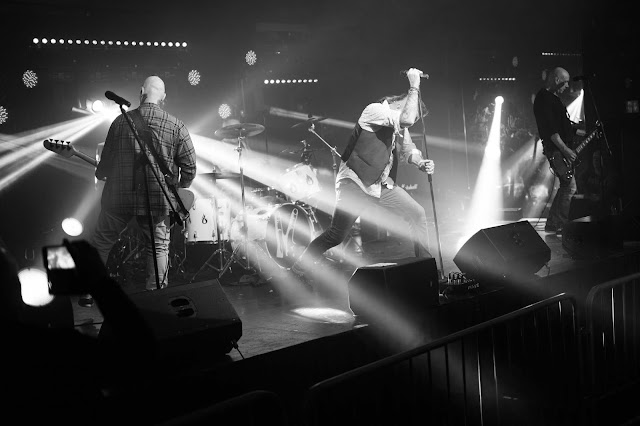 Conspiracy of clowns control the day...

Uproar (https://www.facebook.com/UproarPunkRock/) are the County Durham punk band who formed in 1980 as The Demented. They changed their name a year later following the death of vocalist Stephen "Steppa" Thompson. They released a couple of albums (And The Lord Said "Let There Be!" (1983) and Never Forgive (1985)) and a few 7"'s before splitting up. They reformed many years later and released another album in 2017 titled Waiting For The Revolution, the title track from which I featured here : https://justsomepunksongs.blogspot.com/2017/05/uproar-waiting-for-revolution.html. There was also the The Time Is Coming 7" out the same year.

The 2020 incarnation of the band sees original members Dave Cook and Stu Henderson alongside 80's stalwart Gav Scollen and more recent recruit James Thoroughgood (from Kickback Generation). They've a new ep which was a physical release timed to coincide with the bands appearance at last year's Rebellion Festival and is now available digitally. It's titled We The North and you can check it out here : https://open.spotify.com/album/2Ep2xSyTKXcDNMetXXgtUx

The title track kicks off proceedings and it's a pacy singalong about the economic divide between north and south that'll stick in your head (I'll play it on next Sunday's Just Some Punk Songs show). Bread And Circuses is a political call for change. Always Remember Me (JRF) is sentimental song about missing a loved one (I feel I should know who it's about and the story behind it but I don't) and You Decide rounds off a very impressive ep by asking whether you should turn the other cheek or push to the front ready to fight. It's no bells and whistles old school punk rock from a band that are sounding as good as ever and who can write both a good tune and intelligent lyrics.

This song is called Bread And Circuses...