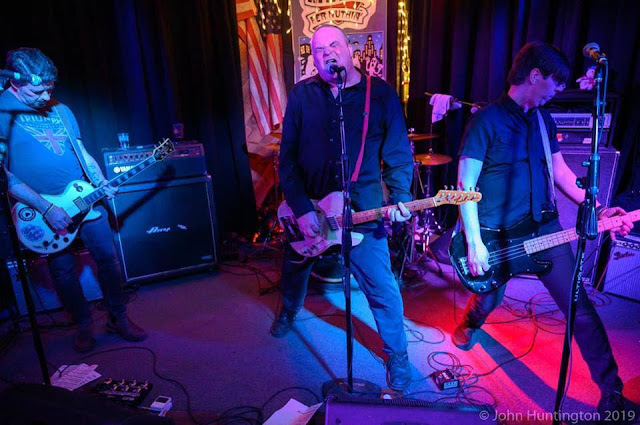 It's early Sunday morning as I sit here typing this, my head hurts as a result of a heavy night (far too many cans of Stella chased down with several vodkas) and my throat tastes like the bottom of the cat's litter tray. But I need a blog update for you guys so I check the playlist for this week's Just Some Punk Songs show and decide to highlight a song by one of the bands on it. It's a song that even in my fragile state sounds great as it plays through my headphones. I think you'll enjoy it...

Cash Registers were born in the gutters of New York City and play a melodic and frenetic style of stripped-down classic punk that's indebted to the likes of The Ramones, Buzzcocks, Black Flag, Dead Kennedys, Circle Jerks etc. The line up of the band is John Bendik (guitar/vocals), Mark Zadroga (bass/vocals), Matt Ernst (drums) and Rob Carter (guitar/vocals). They've been around since the 90's though there was a long period of inactivity before frontman John discovered a hidden treasure trove of demos which were remixed, remastered and released on Million Dollar Records in 2014 as the album Context Demos. A couple of years later we were treated to a bunch of new songs when they released the 20th Century Eyes album and now they're back with an excellent new single. It's available as a name your price download here : https://cashregistersnyc.bandcamp.com/album/lets-be-bad-b-w-my-destructive-personality

You can find out more on the band here : https://www.facebook.com/cashregistersnyc/

Both of the new songs are great, they sound to me a little like Superchunk at their punked up best. I'll play Let's Be Bad on the show later today (https://www.facebook.com/events/2346976162281365/) but on here, just before I head off to the kitchen in search of headache tablets, I'll leave you with the flip side. This is My Destructive Personality...