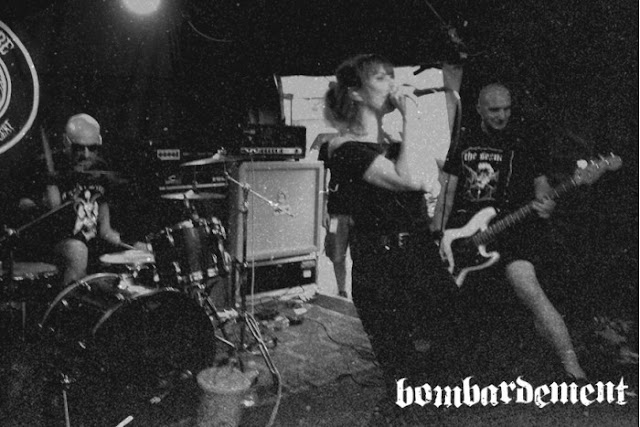 "Whats D-beat?" someone recently asked me. I replied it's the kind of heavy pounding punk rock that was made popular in the 80's by Discharge and other bands of that ilk, it's similar to what people call crust punk. If that person asked the same question today I'd just reply, "listen to these mate......"

Bombardement are from Bordeaux and they feature members of Gasmask Terror, Monarch, Shock, Diktat, Endless Floods and more. The line up is Emilie "Milia" Bresson (vocals), Nicolas "Nico" Lambert (bass), Benjamin Sablon (guitar) and Luc Ardilouze (drums). They released an 8 track demo cassette back in 2016 which I didn't hear it till recently but it's well worth checking out on Bandcamp (name your price). What brought them to my attention is their recent blistering Self Titled album. It's 8 tracks of female fronted noise that'll peel the paint from your walls. At times releases like this are just a bit too extreme for my delicate ears but Bombardement are very accessible. Complimenting the ferocity are tunes. Granted those tunes are getting the shit pummelled out of them by a band that ain't reining anything in but they're there nevertheless. Straight from the opening track (you'll find it below) you'll know you're in for a treat. I played one of the songs, Brink Of Collapse, on a recent show and an enthusiastic chatroom confirmed it wasn't just me that the band were impressing. If you like your music fast and loud then what are you waiting for, either grab the vinyl     http://www.destructure.org/store/bombardement-st-lp or snap it up name your price :   https://bombardement.bandcamp.com/album/bombardement

As openers go, this is some introduction. It's called Wheel Of Destruction...