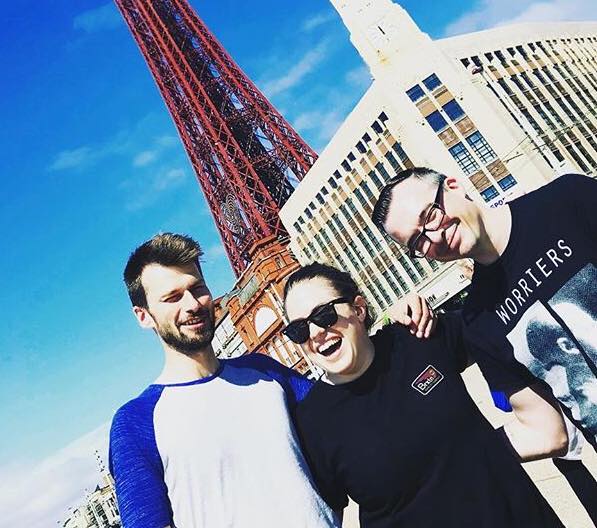 No strangers to this blog, Pardon Us are a melodic punk 3 piece from Liverpool formed by members of Down And Outs, Flamingo 50, Town Bike and The No Marks. They've a debut album on it's way, it'll be titled Wait and it's out in September on Everything Sucks Music (UK), Fixing A Hole (Japan) and Johann's Face (USA). They're streaming a song from it called Inconvenient Reminder and it's damn good so check it out : https://pardonus.bandcamp.com/album/wait

Today, a couple of members of the band, bassist Alex and drummer Gabby have each chosen 5 of their favourite songs. Guitarist/vocalist Morgan Brown chose a Top 10 back in 2017 https://justsomepunksongs.blogspot.com/2017/11/top-10-songs-chosen-by-morgan-brown.html


I always look forward to new Lemuria music; partly because it’s always the most interesting thing on any playlist, and partly because they seem to get better and better with every album.

2)  PROPAGANDHI - ...And We Thought-Nation States Were A Bad Idea


For me, Less Talk More Rock was the sweet spot between Propagandhi’s early snotty punk and their recent thrash stuff. The thunderous melodic start to Nation States rolls perfectly out of a spoken word interlude, and still gives me goosebumps every time.


Worriers are my favourite pop punk band. Lauren Denitzio’s haunting vocal is my main influence when I occasionally take the mike for a lead. If only I could sing as well as her!


I got into the Buzzcocks in typically ignominious style through their ‘best of’ - though Singles Going Steady must be one of the best best-ofs ever. I later found my favourite track Promises on 7-inch in Dig Vinyl in Liverpool. Love lyrics, frantic drums, buzzsaw guitar - epic.


I first heard the Adolescents playing Tony Hawks Pro Skater in my teens - it was this track, and it’s still my favourite off a ridiculously strong first album.

1)  THE DISTILLERS - City Of Angels


The Distillers were one if the first punk bands I got into, and this song on Sing Sing for me was just a great driving track with awesome drums and a boss melody. Honourable Mention, Gypsy Rose Lee.


It was pretty hard to pull a single favourite track out by OWTH, but here’s one. These guys write some amazingly powerful songs and are catchy as hell.


There are loads of amazing songs by Good Luck, but this one just makes me very happy! The lyrics in this song for me are awesome.


Non-punk mention. Grab that Gun is probably one of my all time favourite albums, and this track is awesome. I really love all the different elements to this track, the organ adds a depth to it that I really love.


This song has stuck with me since the first time I heard it. Its punchy and has an awesome chorus. I loved Dave’s drum part then, and very much still do.
Posted by mickfletcher at 06:33

Email ThisBlogThis!Share to TwitterShare to FacebookShare to Pinterest
Labels: Pardon Us, Top 10