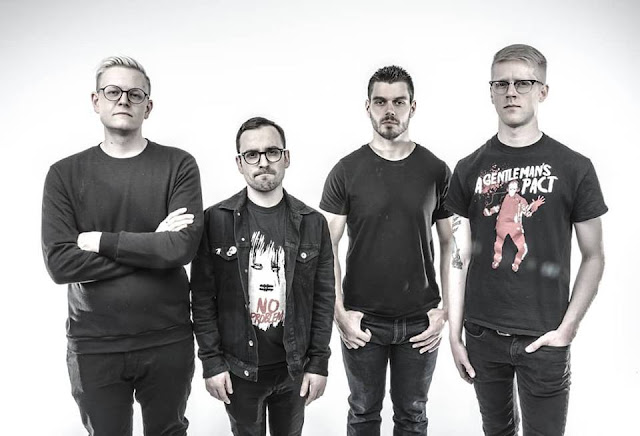 On yesterday's Just Some Punk Songs show I played a new song by Sleaford Mods expecting the folk in the chatroom to be unanimous in their love for it but was a little surprised that it divided opinion. The song that followed it however reunited the room, everyone was a fan and therefore it's getting shared to a wider audience today.

The Nielsens are from Edmonton, Alberta and were born out of a love of science fiction, horror and 3 chord punk rock (not much chance of them failing to find favour with me then!). Influenced by some of the genre's best (Ramones, Lillingtons, Descendents, Riverdales, Groovie Ghoulies etc) they line up thus; Ryley Conroy (guitar/vocals), Phillip Toutant (drums), Addison Braa (bass) and Cody Blakely (guitar).

They recently released an album called Blurry Photos, 14 tracks of pop punk with a little bit of a hardcore punchiness about it. They sing about subjcts such as the doomed Challenger space shuttle actually being a top secret mission devised by President Reagan to beat the Russians to Mars, Freddy Kruegar being back and looking for revenge and how people in black cars will come for you if you broadcast the truth. I love this sort of thing when it's done well and The Nielsens do it very well indeed. Check it out :  https://thenielsens.bandcamp.com/album/blurry-photos

You can get more info here :  https://www.facebook.com/TheNielsens780/

If you're planning what to do with yourself next summer here's a bit of advice. Listen what the locals say and stay the fuck away from camp Crystal Lake...

I don't wanna go to camp next summer,
Don't want to be in charge of the safety of others.

We shoulda listened to what the locals say:
We should stay the fuck away from Camp Crystal Lake.

You know there's probably better ways to spend your summer,
A machete to through the backs kinda really a bummer.

Well your kids are better off homeless on the streets,
Then camping in the woods with Jason Voorhees.

We shoulda listened to what the locals say:
We should stay the fuck away from Camp Crystal Lake.