The Menstrual Cramps - Boycott The Lot 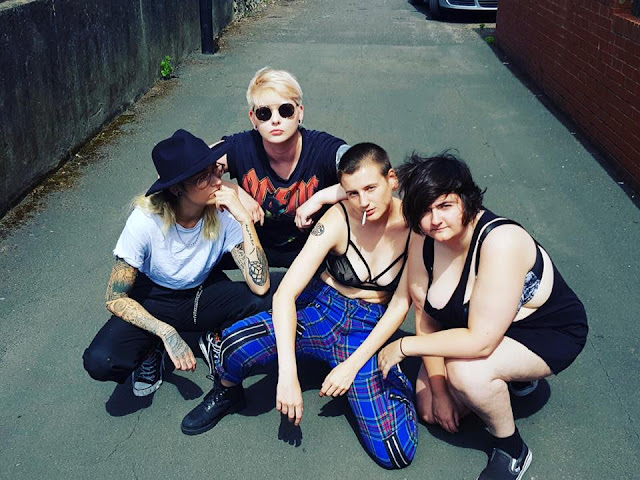 The Menstrual Cramps formed in Bristol before moving to London to record their 2017 debut album We're Not Ovaryacting. Diy, political, riot grrrl punk with a sense of humour, definitely a band to check out. A typical example of their music comes in the form of first single My Bush Ain't Ur Business, a song that upset the powers that be on Youtube but which can be found on Vimeo (https://vimeo.com/184982068). Other highlights from the album include Cull The Tories, Hashtag Sad Penis, Another Sesh and Lying Cheatin' Fucking Scumbag. Poly Styrene once sang "Some people think little girls should be seen and not heard." Like Poly Styrene, this is a band that would give those people short shrift. The Menstrual Cramps are loud, opinionated but definitely not po faced. They're going to speak their minds but they're going to have fun too.

Lining up with Emilia Elfrida (vocals), Cooper Rose (guitar), Robyn Jenner (bass) and Beth White (drums) they've recently returned with album number 2. It's titled Free Bleedin' and you can stream it on Spotify, i Tunes, Google Play etc. Cds will be available at their upcoming gigs and you can find details here :  https://www.facebook.com/TheMenstrualCramps/

The first video from the album is below. Unfortunately for some reason I can't suss out it doesn't seem to want to paste on here so you'll have to click the Youtube link to watch it. It's called Boycott The Lot :  https://www.youtube.com/watch?v=YvsSMGiBTNg