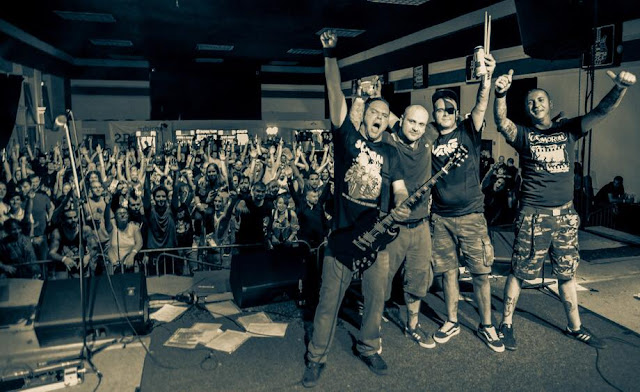 Originating in Romania around 20 years ago but now relocated to London, Scandal are a street punk band who've featured on here a couple of times previously and who's most recent couple of eps and their 2018 album On A Roll can be found here :  https://scandalstreetpunk.bandcamp.com/

Featuring a line up of Gabi Scar (vocals), Vlad Octavian (bass/vocals), GM Gigi (drums) and Ricardo Stoco (guitar/vocals) they return to the blog today with a new single. As well as the new single, they've been lined up to play next April's Undercover Festival where they'll share a stage with the likes of Sham 69, Slaughter And The Dogs, GBH, Chelsea and many more. You can get details here : https://www.facebook.com/scandalstreetpunk/

The new single is a mid paced anthem warning anyone who may be listening not to get in the way of a pissed up and pissed off angry punk. It's called Five Seconds...