Problem Child - Nothing To Prove 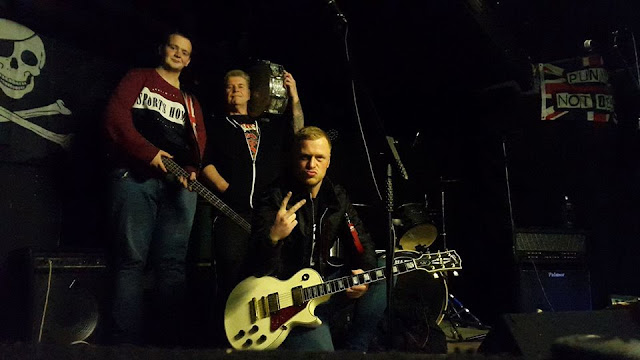 Exciting new Paris label Evil Has Landed Records debuted with a bang last year when they released Savage Beat's impressive Trench Warfare ep (http://justsomepunksongs.blogspot.co.uk/2018/01/savage-beat-trench-warfare.html). Today I'm posting a song from their second release, a song that'll prove their opening salvo was no one off fluke.

Problem Child are the Stoke On Trent working class punks who's debut release  went down a storm when I featured it last year  http://justsomepunksongs.blogspot.co.uk/2017/05/problem-child-your-mother-would-be-proud.html

The 3 piece, who's line up features genre veterans who've featured in the likes of Live Wires, Wolf Bites Boy and Dom Morgan ( John Barks (vocals/rhythm guitar), Paul Hankey (drums) and Tom Mollatt (bass) ), are readying themselves to return with new material. I've been lucky enough to get a sneak preview of a few of the new songs and can confirm that they're definitely worth watching out for. One song I hadn't heard, but which is now available in unmastered form on Bandcamp is the song you'll find below. It's going to feature on Evil Has Landed's second release which will drop in April. I've no more info on it at the moment but I'll be awaiting updates on Problem Child's Facebook page :   https://www.facebook.com/thisisproblemchild/

This is Nothing To Prove....