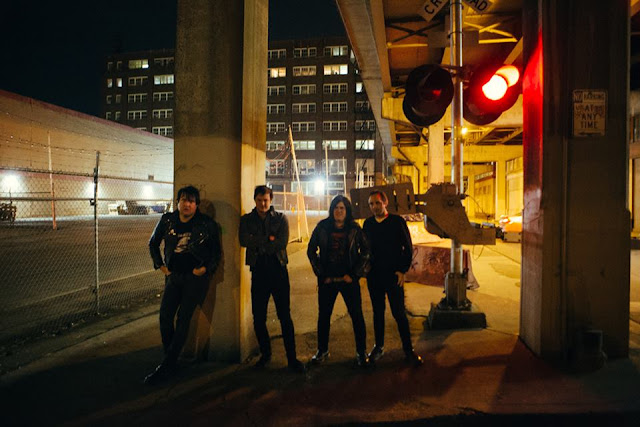 Hopefully you all checked out the 2 Just Some Punk Songs Best Of 2017 shows that highlighted some of last year's most enjoyable releases. Obviously there were plenty of other great shows highlighting music from 2017, a couple were hosted by Wayne Elliott and it's one of the songs that he played that I'm posting today. If you want to check out the show that featured it (and I recommend you do so) it's saved here...  https://www.mixcloud.com/Wayne_Elliott/pulsebeat-68-the-2017-review-show-part-one/

Long Knife are one of many great bands that have graced this blog that are from Portland, Oregon. They're a hardcore punk 4 piece featuring Colin Jarrell (vocals), Scott Goto (guitars), Keith Testerman (drums) and Chris Reid (bass).     Testerman is a recent addition on drums after previously playing in bands such as Warcry, Lebenden Toten and Hellshock. Amongst their influences they list the likes of The Geto Boys, Cro-mags and Poison Idea.

You can check out their earlier releases (including their 2 albums) here :   https://longknife.bandcamp.com/ but today's song is taken from last year's impressive Sewers Of Babylon ep which was released on Beach Impediment Records and is available here :   https://beachimpedimentrecords.bandcamp.com/album/long-knife-sewers-of-babylon-ep

Regular visitors may have noticed that a couple of days ago Rich Cocksedge guest reviewed a song on here and it was he who reviewed the Sewers Of Babylon ep for Razorcake. He proclaimed it puncier and more melodic than their earlier work calling for people to join the Long Knife Appreciation Society otherwise they can consider themselves total dimwits. When people with immaculate taste such as Wayne and Rich are so impressed you really need to sit up and take notice.

This song is called The Tower....