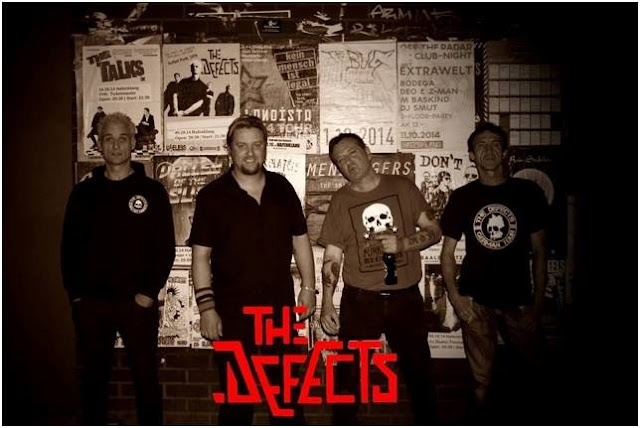 Today's song is the title track from the new album by The Defects and it concerns itself with the dossier which Tony Blair used as a reason for joining the United States in invading Iraq. Supposedly Saddam Hussein had an armoury of chemical and biological weapons of which some were deployable within 45 minutes. With that information, we went to war, and didn't it turn out well, bringing peace and harmony to the world.

The Defects formed way back in 1978 in Belfast, the original line up consisting of Ian "Buck" Murdoch (vocals), Marcus "Dukie" Duke (guitar), Jeff Gilmore (bass) and Glenn Kingsmore (drums). After releasing the Dance (Until You Drop) ep on their own Casualty label they signed to WXYZ Records and put out a follow up, Survival, and a debut album, Defective Breakdown. I.D. Records released their cover of Suspicious Minds but things fell apart not long after.

There was a brief appearance in 1996 when they played a punk festival at the Bath Pavilion but it wasn't until 2010 that a proper reunion took place. Still featuring Murdock and Kingsmore, the new line up also includes Roy McAllister on guitar and Aidy "Fudge" Dunlop on bass. In 2011 Punkerama Records released the Revelator ep and then in 2013 the Politicophobia album and a couple of singles (Riot Free Zone and Hill Street).

Email ThisBlogThis!Share to TwitterShare to FacebookShare to Pinterest
Labels: 2015, punk, The Defects