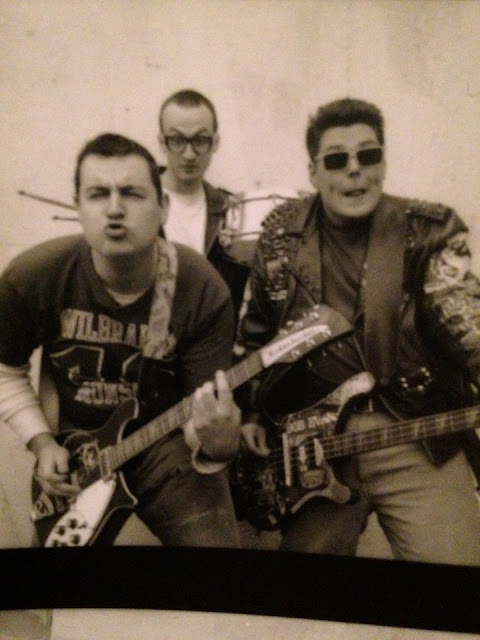 Back in September I received a message which went "This is jesse k from automatics usa. I wanna do a top 20 if you want it." The Automatics have already had a song featured on here and are responsible for some of the best pop punk songs ever released so the obvious reply was hell yeah! Mid November brought another message, "I almost finished last night." Then yesterday, the list arrived. It's a top 25 (plus a few others), and it kicks ass. If you're unfamiliar with The Automatics, you can find all their stuff on their bandcamp (you'll be so glad you checked them out). https://automatics.bandcamp.com/

As the 80s were turning into the 90s and we were buried in hardcore, there were a few bands like Head, the Queers, and the Hard-Ons playing three-chord punk songs with elements of POP and the Ramones. The Richies were doing it in Germany and treated us to this Ramonesy version of the best POP song given to us by hardcore, Husker Du's "Don't Wanna Know If You Are Lonely".

A genuine version of a hit by the Banana Splits, who are one of my faves! The Queers did a good version of "I Enjoy Being a Boy" too. My friend Adam heard this Queers song and asked me if the Banana Splits were a 60s psych band. He was blown away when I explained it was a kids show and showed him pictures of Fleegle, Bingo, Drooper, and Snorky!

The first song I heard Adam cover was "You're Not Blank" by The Dils. His band The Exploding Hearts covered "Walking Out on Love", a hit for the Paul Collins Beat with its roots in the Nerves but first recorded by The Breakaways. The Methadones also covered this song on their covers album, and Green Day covered this song every night on Broadway at the end of their American Idiot musical. None of these guys can touch the Breakaways version (The Muffs, who we will hear from later, did a great version of The Beat's "Rock n Roll Girl") but I praise the Exploding Hearts for bringing F.U.2's "Sniffing Glue" to the pop-punk world! AMAZING!!!

There are a few records out there full of nothing but covers; The Vindictives "Partytime for Assholes", Face to Face "Standards and Practices", "Acid Eaters" by The Ramones and this one by the Methadones, full of power-pop covers. What a batch of great songs, many of which were on the Rhino D.I.Y comps that came out in the early 90s. "Starry Eyes" was one of my first 45s and they did a great version of that, but I think the best song on the album is this cover of The Jags "Back of my Hand" a power-pop hit that I have been hearing recently on WXPN.

I just mentioned Green Day and Broadway I know, and know i'm including this Diana Ross song, don't stop reading now. Remember who took the Riverdales out on the road. Plus this came out on Very Small Records one of my favorite labels and it's a pop-punk supergroup! What did you expect "Hey Jealousy" by The Ergs!? OK! That's a good one too!

20)  Screeching Weasel - I Can See Clearly

These guys have to be on a best of pop-punk list. My favorite record by them is "My Brain Hurts" and this cover of Johnny Nash's "I Can See Clearly Now" fits into this album seamlessly and is as strong as any of the originals. It even ended up in the movie "Jennifer's Body".

A great pop-punk cover of a song by the Knack that isn't "My Sharona", that was also recently covered by the mighty Captain Nines and the Knickerbocker Trio! A lot of pop-punk bands were covering 80s songs in the early 90s and eventually we got Me First and the Gimme Gimmes who ran with it. I think the A.G.'s covered "Jessie's Girl" or maybe it was Doc Hopper, who also covered "Jenny 867-5309". All great tunes!

Staying in New Hampshire for this one! If GG seems like a stretch for some of you pop-punkers, get the Jabbers stuff, or look at the catalogs in your ALL records, buy the The Chemical People records, and realize these are GG songs. Pop-punk's roots are in Ramones, and 50's rock n' roll, but also in garage, powerpop, glam, and bubblegum, like this song from one of my favorite bands the Ohio Express! Let me make this one a tie! I was saying that beat and garage influenced pop-punk. These Paisley Undergrounders, The Three O'Clock bridged that gap with the Easybeats classic, "Sorry".

Oh yeah! And the Beatles! Gotta have a Beatles cover. These '77 punkers are one of the first pop-punk bands as far as I'm concerned.

Some artists biggest hits are covers. Joan Jett and The Dickies have always been two of my favorite bands and they both have made a living off cover songs. This hit was co-written by Joey Levine from Ohio Express and Bo Gentry, and originally performed by Tony Orlando and Wind. If you don't think Joan Jett is pop-punk then just wait 'til the Queers cover this one.

15)  The Dickies - Eve of Destruction

This song is a lesson on how to turn a song into a pop-punk hit! 1965 hit written by P.F. Sloan and recorded by Barry McGuire. Johnny Thunders did a great version of this song too. He did a lot of great covers. Fuck, you know another good one The Heartbreakers cover of "Do You Love Me" by the Contours but covered in the 60s by Dave Clark Five, Paul Revere and the Raiders, The Sonics, and The Kingsmen. The Heartbreakers and The Dickies are just as important to pop-punk as The Ramones.

14)   Descendents "Wendy" The Beach Boys covered a lot of the songs on this list but they wrote some amazing tunes as well. This one was written by Brian Wilson who is a genius. I love both versions of this song but when I hear the Descendents version I'm not immediately reminded of the Beach Boys. The Descendents and Beach Boys are equally important to the genre.